In American University’s The Eagle: 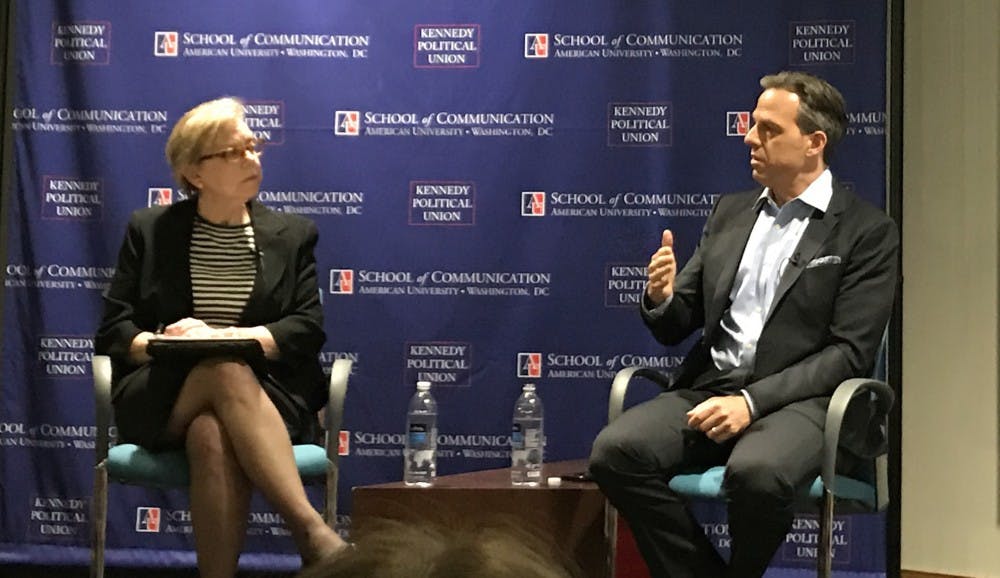 Jake Tapper, CNN’s chief Washington correspondent and anchor, discussed his experiences as a journalist under the new presidential administration during an event hosted by the Kennedy Political Union and School of Communication on Tuesday night.

School of Communication professor Jane Hall moderated the event, posing her own questions and soliciting questions from the audience for Tapper to answer.

For the past 14 years, Tapper has been one of D.C.’s most widely-respected reporters, KPU director Valeria Ojeda-Avitia said ahead of the event. Besides working for CNN, Tapper has worked with ABC and other news organizations. Additionally, Tapper has published three books, including “The Outpost: An Untold Story of American Valor,” which debuted on the New York Times bestseller list in 2012.

The event began with a question from Hall, asking Tapper about how he “grills” Democrats and Republicans equally, how he deals with objectivity under President Donald Trump’s new administration, and the pushback on being called fake news.

Tapper said the Trump administration’s lack of respect for journalism and use of falsehoods are troubling.

“Politicians lie. That didn’t start on January 20,” Tapper said. “But the number of falsehoods and the sheer audacity of falsehoods that have come from the White House is something that I haven’t seen.”

Hall asked another question on behalf of sophomore and SG Vice President-elect Solomon Self.

“Is it ethical to be neutral?” Hall asked. “How can journalists fight for the truth when it seems like the truth is becoming part of the issue?”

Tapper responded by saying while there is no such thing as pure objectivity, journalists need to try their hardest to be objective. Additionally, he believes it is not partisan to stand against indecency from politicians.

“It’s not partisan to stand for facts, decency and truth and you will be accused of being partisan for doing that,” Tapper said.

Questions from the audience included one from School of International Service junior Rachel Bernard who asked Tapper how the mainstream media will hold the president accountable with an increase in hate crimes, especially in Bernard’s Ohio synagogue that had received bomb threats.

“That kind of bigotry has no place in the United States,” Tapper said.

Tapper said he is Jewish and told audience members that drawing a correlation between Trump and hate crimes isn’t factually correct. He said Trump should be held accountable for the language he uses.

As the event ended, Tapper advised the audience to write well, not to take rejection personally and to persevere especially in the journalism field.

“I thought he was incredible,” O’Connor said. “I thought he was very poised and very knowledgeable and just very inspirational, and very honest at giving advice to students who are interested in journalism and with what’s happening in the media. I thought it was fantastic.”

Maria Elena Salinas—co-anchor of Univision Newtork News and one of the most influential journalists in the U.S—came to American University in Washington, D.C., to screen her award-winning documentary, “Risking It All: Children at the Border,” as part of the “Films Across Borders” immigration film series in Washington, D.C. Described by the New York Times as “the voice of Hispanic America,” Salinas was interviewed by AU School of Communication professor Jane Hall and engaged with students about immigration, media and politics and her outstanding career.

In this segment a student asks what improvements she would like to see in mainstream-media coverage of immigrants. She says that coverage should include Latino experts and professionals on stories other than immigration. Latinos, she says, care about many issues and coverage should reflect that. “We’re Americans, too,” she says.

Republican presidential strategist Ana Navarro and Democrat presidential strategist Patti Solis Doyle offered their strong views on Donald Trump, Hillary Clinton and the tumultuous 2016 presidential campaign in a discussion with American University students on the eve of the election. Navarro—a Nicaraguan-born Republican and CNN commentator—was outspoken in her criticism of Trump’s campaign and his views on immigration and women; and she discussed the impact of Trump on the Republican party and the country.

Solis Doyle—the first Hispanic woman to run a presidential campaign and a current CNN commentator—talked about Hillary Clinton’s outreach to Hispanics, Donald Trump and Latino voters, and the challenges Clinton faces with young voters. The two were interviewed by Professor Jane Hall, and they analyzed TV commercials with Professor Andrew Babb and their students and classes in politics and the media and political advertising in the School of Communication at American University. The event was co-sponsored by the School of Communication and the non-partisan Kennedy Political Union, along with the names of the rest of the groups.

In this segment Navarro responds to a student’s question about “how did we get here,” how did Donald Trump win the nomination; Navarro discusses crowded Republican field and Trump’s media savvy and voters’ anger. Solis Doyle asserts that Republican candidates did not oppose Trump out of fear of alienating his supporters.

American Forum 2017 in the Media