When Maya Krishnan voiced her concerns about instances of cultural appropriation on American University’s campus, Breitbart published a story blaming her for shutting down the Bhakti Yoga and Vegetarian Club. She had organized a panel on cultural appropriation and written an op-ed for the Eagle. Soon after the Breitbart article came out, Krishnan started receiving messages online. Krishnan took her father’s advice and decided not to engage with the piece.

“I was getting a lot of Facebook messages from people both good and bad,” she said. “I just didn’t engage with anybody.”

Krishnan’s activism began at AU since she grew up in a liberal Davis, California. She did that by joining SASA as a first-semester freshman. “Generally, I feel very alienated as a person when I don’t have connections to my culture [and] home,” she said. “South Asian identity and culture is where I’m most comfortable because that’s what I grew up with.”

Krishnan’s activism is also, in large part, informed by her parents’ journey of immigration. Because they had thick accents and English was not their first language, they faced a lot of discrimination. “My parents were happy to be here,” Krishnan said. “They did not question the things they were going through because they accepted their conditions.”  Krishnan, however, feels more responsible to demand for change. “Being born and raised in the United States, I grew up with a sense of entitlement that my parents did not have,” she said. “As an American, I can ask for what I want to ask and demand for respect and equality.”

Krishnan wants to go into international activism, gearing her focus towards community building and cultural and traditional norms that are ingrained in society to further oppress people. As an American, she also cares about domestic issues. “I feel like there are a hundred arrows being shot at our country right now,” Krishnan said. “Where do you even begin?”

It seems that she would begin with taking on educational inequality interests her. She wants to empower people through education the same way the views, opinions, and beliefs of the alt-right are both empowered and validated. “There are many groups of people in this country who are told they don’t deserve [education],” she said. “Giving people the chance to empower themselves through education is very important.” 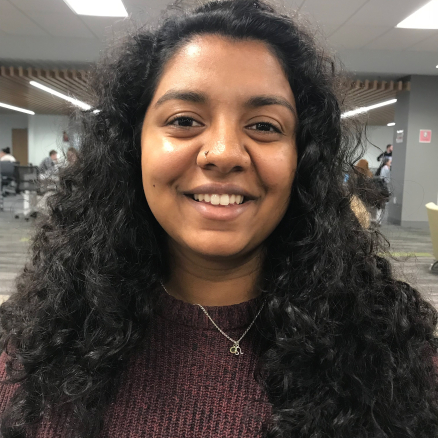