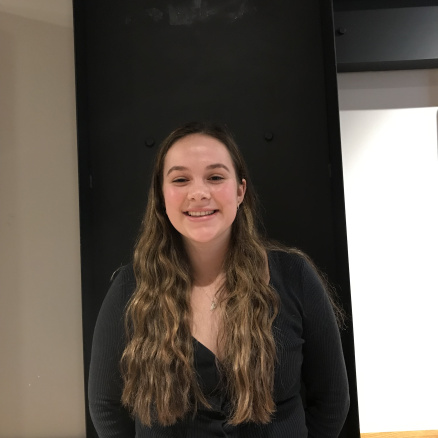 Giuliana Johnson, a sophomore from Rochester, New York, discovered her passion for advocating for human rights when she decided to attend her dream school, American University.  Heading into her second semester of her sophomore year, Johnson found her new home away from home in Washington, DC. Passion is an understatement when speaking to Johnson about human rights. Giuliana who was always passionate about human rights heard about Amnesty International and their recent comeback onto American University’s Campus and immediately decided to invest her time and see what the club had to offer.

According to Johnson, Amnesty International’s club goal is to protect refugees however they can.  “We want American University to accept refugees and we’re trying to do this by the end of the semester.” Johnson says.  Johnson’s motivations for joining the club soon led her to also become Vice President and she takes pride in knowing her passion is helping people and making a difference. She wants people worldwide to know they’re human beings too and deserve to have the same rights.

Johnson thinks politicians and Congress have dealt poorly with this issue and says, “I think obviously it’s a mess all around, just the people aren’t educated enough and aren’t aware of what’s actually occurring.” People don’t need to be insecure about refugees taking their jobs because,  “It’s the jobs no one else will take. They’re not the jobs that middle and upper class people want. They just want a chance.” She also says, “This whole stigma about refugees is sad, the U.S. likes to tell us what to do and when they do tell us it’s not always the right thing.” Johnson also explains to me that all refugees are welcomed and she says, “We want AU to welcome all refugees. It doesn’t matter what countries they are from.”

Refugees are constantly “facing political persecution” Johnson says. “Their whole country is in danger and they can’t rely on their country for certain things.” Johnson says the club’s goal is to not only raise awareness but to plan panels where professors, professionals and refugees come to campus to speak about the topics nobody wants to talk about. Lastly, Johnson says, “Amnesty International is an organization fighting for the universal rights for all people.” Johnson hopes that the club will only grow from here and most importantly, inspire people to believe in refugees and help out in any way they can. She also wants people to know that Amnesty International’s club goal on campus is, “pass a resolution saying we are a university that welcomes refugees. Other than that we want to educate the school about human rights issues that are happening right now.” she says. Johnson also explains how their club has not done a ton of work yet because she says, “we are so new but are looking to do more coming this spring.” “We have our first major meeting coming up next week.”